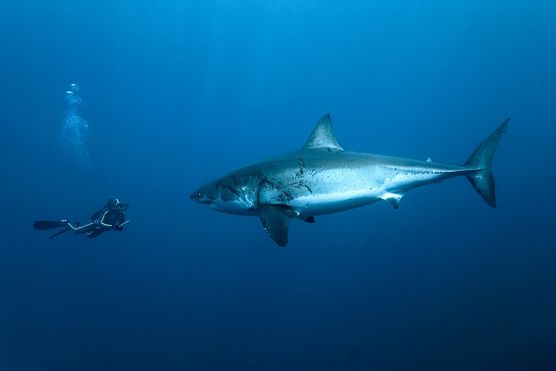 I recently saw this photograph by Pascal Kobeh in a shop nearby and was struck by what this photo captured.  Here was a scuba diver and here was a great white shark just looking at one another.  What was going to happen next? Perhaps nothing or perhaps the scuba diver would get eaten.

That shark is huge! And look at all the scars.  What emotions is that scuba diver feeling? Scared or calm? He or she is holding something – is it a weapon? What is the shark doing? Showing curiosity or surmising the best way to eat the scuba diver?

In therapy, there can be a fear of exploring old wounds or facing our fears.  Those fears are often valid – if you’ve been bitten by a shark would you go back in the water? If you’ve heard stories about dangerous encounters with sharks, shouldn’t you be afraid? And yet often, those fears hold us back from getting what we want from life.

I remember when I went to my first talk therapy session, I thought, “What is the point of going into the past? It’s over”.  Why go into past, isn’t it better to move forward? In therapy, we don’t delve into past issues unless they are relevant to an issue that you are having right now. Many times, those shark bites of the past continue to impact us without even realizing it.  Many times, they impact how we parent and the relationships that we have.  Would you want your child to go into the ocean if you had been bitten by a shark? Very unlikely. But where does that leave your child if she wants to explore the ocean?

The shoot in search of the great white shark took place off the coast of Mexico on the Pacific side, in the waters of Guadalupe Island. This shoot aimed to demystify the terrible myth of the white shark and show that in good conditions, encountering one can be a serene experience characterized by mutual respect and curiosity.